My support crew are vital to a successful swim.  It's just as much a tough day for them as it is for me in the water.  On a boat for 7 hours, traveling at the pace of a snail (no reflection on my speed of course!), in the blazing heat, focusing non-stop on someone flinging their arms over and over..maintaining visual on ships and other *stuff* is exhausting!   I've got a winner of a team by my side!!

February the 25th doesn't *just* stand out as the day I attempt the Rottnest Channel.  It's a special time as my folks who live in the UK fly out to Perth (only their 2nd time in Australia) to be part of the boat crew. I know I'm a little bias...but can I just say that my parents are the best!  Let me introduce them to you here...
Mum - aka Judy
I'm really excited for Mum to be on the boat.  She's quite the explorer herself and has achieved many a feat over the years.  Mum ventures off on herself or sometimes with a companion to cycle various points around the country.  She's completed a cycle from the East-West coast of UK and also from South-North...on her own! She's joined me at the World Ice Swimming Championships in Finland and ranked 28th *in the world*!!

She's my inspiration for so many things and my love for life, my enquisitive nature and my constant hunger to find the next challenge..comes from her!  Thanks Mum, can't wait to have you by my side. 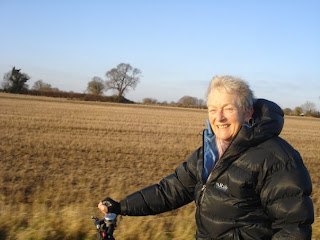 Cycling the lanes around Norfolk 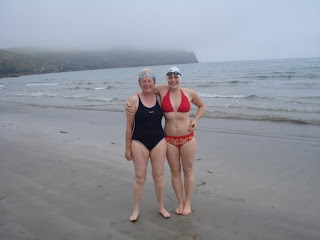 Mum always willing to join me for a dip!

Dad - aka Charles
As I grow older, I see more and more of my Dad in myself.  I used to rebel it with quite a determination but I now love it when I do something that reminds me of him!  He's my hero and his approach to life has provided me with the strength for all the challenges I take on.  Not only is he tremendously wise about *everything* (and trust me, that used to really irritate me!), he also has a wonderfully cheeky humour that's guaranteed to make you feel warm inside.

Dad also has an adventurous streak and doesn't shy away from a challenge.  In the last couple of years he's taken up Archery and now competes..and often makes his own arrows! He's also regularly spotted whizzing around in one of his Austin Seven's that he so dearly restores and cherishes.  I know Dad will have a few cheeky remarks to make about sharks and so forth but he'll end his sentence by saying 'don't listen to the hype Rose..you'll never do it if you take on on that rubbish'!  Good on'ya Dad..just what I need! 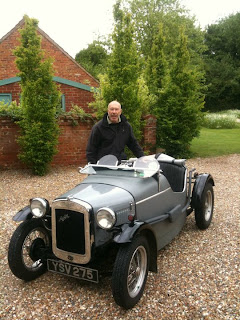 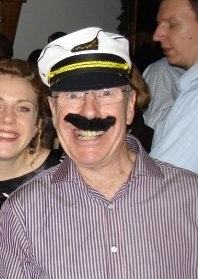 My fancy dress leaving party - Dad came as the
skipper from my English Channel crossing!
Steve - aka 'the boyfriend'
Steve has embraced every element of this challenge as much as I have and has faced a few challenges of his own along the way!  To this day I still get a chuckle from the episode on the kayak with the shark guard!
I've never felt alone and scared of what I'm embarking on, as Steve is always there..reminding me that we're a team and we're doing this together.  He's joined me for every major swim and even sat for 3 hours timing every 100m split..whilst keeping my feeds topped up and offering a smile of encouragement every time I glanced up.
Anyone that knows Steve also knows I'm an incredibly lucky girl!  From my heart..a huge thank you for making this dream such a fun and memorable reality :) 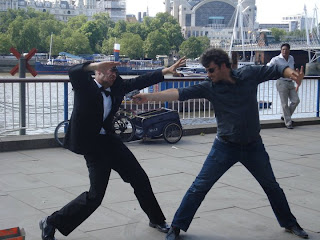 The name is 'Hopkins'...Steve Hopkins... 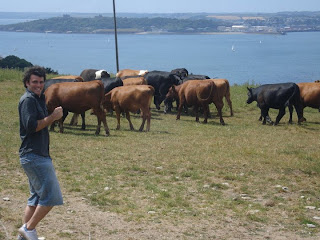 Cows..the most dangerous animal in England! (supposedly!)
Having the right team around you is a major key to success.  I have an absolute corker of a team, in fact, I already estimate I'll have the most awesome team in the Channel.  Create an environment that exudes positivity and surround yourself by inspiration and you're onto a winner. 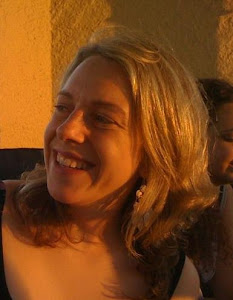 Rose Levien
I really enjoy swimming, particularly in open water. I imagine this blog will help me unearth what I enjoy about it so much. Apart from swimming, I love cooking. I guess it's like a sort of meditation for me. I also love how food brings people together and how it so closely impacts to many things in life. I live in Sydney in the Cubbyhouse with the love of my life, Steve Hopkins. I'm from Norfolk in England and moved to Australia in 2008. I feel sometimes that I'm leading two lives and it's a bit confusing, but swimming helps me work it out! I can't wait to be a Mum one day. I'm looking forward to sharing stories with my children and feeding their imaginations with all the possibilities in the world. I hope you enjoy my blog, it's just a little way for me to share my life as it is.